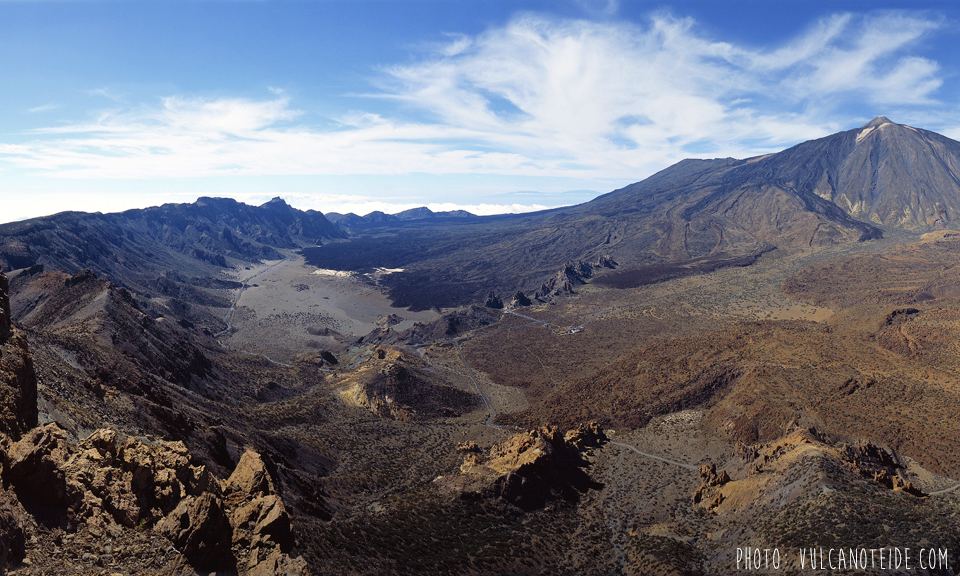 Up until now I’ve been rather vague about the 100 km trail race this endeavour is supposed to be leading up to. But from the very start I have known exactly which race it has to be. I think it’s primarily due to fear for enthusiastically telling about a goal that I might end up failing to realize that I kept it quiet. This is a bit strange though: if my desire is to push my own boundaries, the risk of failure is intrinsically present. That risk is what makes the challenge: I cannot take success for granted. The race that I set my sights on is far from easy, but extraordinarily meaningful. Time to show my cards here and share with you my dot on the horizon!

The Tenerife Bluetrail is a festival with four races of different lengths (plus an additional two short races for athletes with a disability). The ‘Media‘ race is 20 km long, the ‘Marathon‘ 44 km, the ‘Trail‘ 71 km and the crown piece is the ‘Ultra‘ of 103 km. They all finish at the same spot, but have different starting locations. You have probably guessed it by now: my goal is the ‘Ultra‘ race, starting at sea level on one side of the island (in Costa Adeje) and finishing at sea level on the other side (in Puerto de la Cruz). In between lies the Teide Vulcano, with 3718 m the highest peak in Spain and the race goes right over it. Below you can find a map and altitude profile. A total of 6947 meters has to be ascended (and descended). That is a rather big hurdle on its own, but a good 30 km of the course has an elevation above 2000 m and thin air and altitude sickness will make the challenge even bigger. Taking into account the warm weather in June and a starting time of 11 pm (much of the climbing will be done at night) gives a race that throws much more at me than ‘just’ traversing 103 km.

Our own Dalí was found roaming the mountains of Tenerife, before he ended up in the Tierra Blanca refuge. And as a volunteer for Podencoworld I have now facilitated the adoption of quite a few other rescued dogs from Tierra Blanca, paving their way to warm, loving homes in the Netherlands and Belgium. I have already described my motivation for The ULTRA Endeavour here. Much of the cruelty I run for happens in Spain and many of the dogs that I somehow deal with personally come from Tenerife. It feels poetic and fitting to complete this endeavour on Tenerife by running across Spain’s highest mountain from sea level in a race that will put all my limits to the test. High personal involvement and motivation are crucial to power through the toughest miles of a long ultra like this. My goal and this specific setting will certainly provide me with that!

June 2021 will be the right time. Upcoming June is too fast: I’ll need more time to prepare my body for racing 100 km in a responsible way and to make all the mistakes I cannot afford then in shorter races beforehand. Even if I wanted to register: I wouldn’t be allowed. To qualify for participating in the ‘Ultra‘ race, recent completion of a mountain race of at least 70 km with 1900 m of vertical gain is mandatory. Therefore I have registered for the slightly shorter ‘Trail’ race during the Tenerife Bluetrail 2020. On June 6 I will sink my teeth in the 71 km with 3501 m of vertical gain! It serves as qualification for the ‘Ultra‘ one year later and it will teach me a tremendous lot about what to expect from it: the terrain, the climate, the altitude (although the ‘Trail’ doesn’t scale the top of Teide, it also has an elevation of over 2000 m for more than 30 km) and without doubt much more that I’m not even aware of now. Additionally, traveling to Tenerife is an excellent opportunity to finally visit Tierra Blanca and volunteer for a few days. I have been procrastinating that for much too long already.

That’s it: the goal is on the table and with that a bit more tangible. For me it’s very motivating to share it, but also a bit scary. There is a long way too go, but the first steps have been made and the next steps are clear. Let me close with this video that gives a beautiful view of the Tenerife Bluetrail event from last year. The next two years I will be there myself!