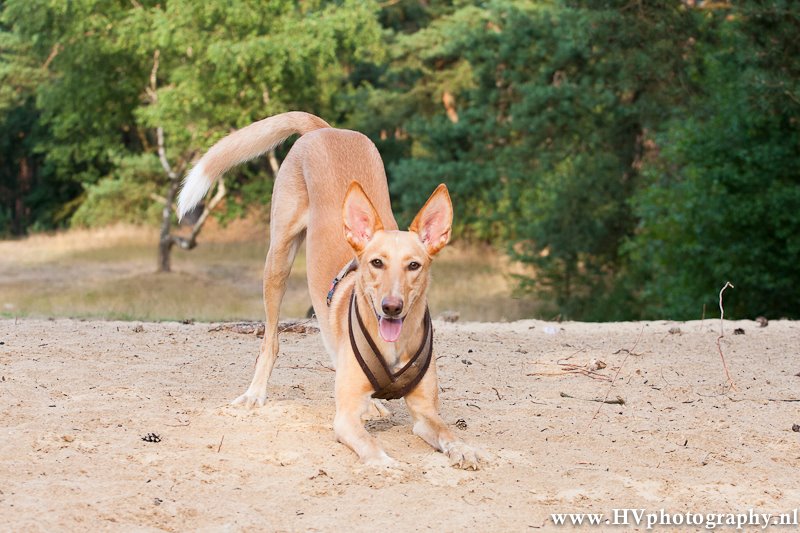 This post was originally written in Dutch on August 2, 2019.

How does one end up living and sharing everything with four dogs with a total weight of 110 kg? Good question. Sometimes I wonder how an outsider would look at the life Michelle and I built together in happiness. I imagine we’re considered a bit of an oddity. It all started with Cash, nearly nine years ago.

Cash is a Podenco from Spain. During the Monteria, a traditional Spanish driven hunt, large numbers of Podencos are deployed to chase the game (boar, red deer, fallow deer, mouflon) towards an armada of hunters. It is a showpiece of cruelty, in which the hunters try to kill as many animals as possible with as little effort as possible. A famished dog hunts more ferociously that a satiated dog. And when for the long remainder of the year there is no hunting, the dogs are chained up in kennels, short enough to make sure there won’t be fights caused by frustration, hunger or fear. Many dogs are discarded. A compassionate hunter will bring his dog to a shelter of release it into the wild. Less fortunate dogs are drowned, shot or hung from a tree. After each and every hunting season the shelters are flooded. And because of the obstinate myth that fixed dogs are worse hunters, this goes with a tidal wave of unwanted puppies and pregnant dogs.

Cash was born on Januari 8, 2011 in a killing station in Spain, where his pregnant mother was left for a certain death. Within two weeks Cash and his brothers and sisters were saved and taken to a local shelter. As soon as they were three months old and European law allowed for them to be transported, they were moved to the Netherlands where shelters often have many empty kennels left. Cash ended up in Almelo, until Michelle and I visited in late April. We were conservatively looking for our first dog and even though we had convinced each other that we were only visiting for the purpose of orientation, we bought a leather collar and leash on the way there. It took less than fifteen minutes before we were standing outside again with that collar around Cash neck, having just paid for our new acquisition with our debit card. The door fell shut behind us and we were suddenly faced with the challenge of getting a puppy that knew neither a collar nor walking on a lead to our rented Fiat Punto. It was one of the most surreal experiences of my live.

Cash stank to high heaven, having lain in his own urine all along. First stop: Pronk’s Dogshop in Enschede for a big bottle of ‘Jean Peau’ (because regular shampoo has the wrong acidity for a dog’s skin). Cash had to familiarize with everything and was often numbed by fear: his world had never been bigger than his kennel. During the first days we frequently had to carry him to get him from A to B. But with love and patience Cash learned to walk on a lead, that grass and wind aren’t scary, that if you can see the creek where you are allowed to pee from behind the window in the living room you cannot relieve yourself yet, that women are nice (and men are not), that driving is stupid (but the places it gets you aren’t), that nothing tastes better than freshly baked bread, that hugs are awesome, that rules are there to break, that you can refuse going outdoors when it rains and that couches and blankets are the pinnacle of human civilization. And when after a few months he got a girlfriend, the irresistibly mischievous Australian Shepherd puppy Vienna taught him how to play.

Today, eight and a half year later, Cash is the most stable and grounded dog you can imagine. He enjoys his peace and quiet, being outdoors when we go rock climbing or running through the woods. At home he likes stretching out on the couch, close to the firelight of the hearth, preferably under a soft blanket cuddling up against one of us. And when nobody’s watching, he is a bit mischievous himself. If all dogs were like Cash, Michelle and I would probably be having more than ten of them. Now we only have four. So that’s actually quite modest, wouldn’t you say?